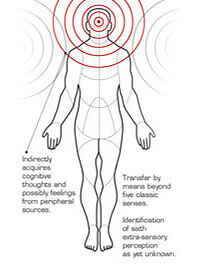 Telepathy is the ability to psychically communicate information from one mind to another by means other than the known perceptual senses. This can range from the traditional reading of minds to the implanting of thoughts into the minds of others and eventually extending one's radius of mind-reading. This could also allow the user to induce addiction, or project thought-wave "static" into the minds of those who try to invade your mind. They could even possibly exercise Psychic Persuasion or a Danger Sense after further practice.

Lasting telepathic alterations, such as constant mind control or erasing memories, to a person's mind leave "scars" but evolved humans possessing the ability of healing or regeneration can counter memory loss by healing the scars.

A telepath who could master their abilities would be able to control every body function that the mind can control, either consciously or subconsciously, of a great number of people at once. They could control the minds of people entirely, causing them to act or do however it is they want, cause their hearts to stop killing them instantly, or even trap them in extremely vivid illusions.

Matt's power first manifested as mind-reading, but he subsequently discovered that he can also send his thoughts to other people as a form of communication. His control over his ability continues to improve with practice. He can actively focus on the thoughts of a particular person, but he still sometimes picks up thoughts at random from people in his vicinity, and he can have difficulty "blocking" the thoughts of agitated individuals or crowds. He was once overwhelmed by the intense thoughts of a crowd of frightened customers at a convenience store, but he has not had any "overload" problems recently.

Matt once told his wife that he is only able to hear the thoughts of others. He was unable to receive mental images, complex thoughts, or delve into the memories or emotions of others. While he is now able to send thoughts and even influence the behavior of others, he has yet to receive a mental image.

Matt is unable to read The Haitians's mind, and he has great difficulty reading the minds of other people when the Haitian is "screening" against mental intrusion. With extreme effort, however, Matt can occasionally pick up a word or two through the Haitian's interference.

If a person is thinking in a language other than English, Matt can still hear them, but he does not automatically understand the thoughts.

To escape from his father's nightmare, Matt was able, for the first time, to telepathically communicate to Nathan and later, Molly. Later, Matt was able to break himself and Molly out of the "nightmare" trap into which Maury had placed them. Matt was even able to turn the tables on his father, trapping Maury in the nightmare.

Matt has also discovered that he can coerce people with his power. Not only can he hear thoughts and send them, but he can also implant them, as he did with Molly Walker and Detective Fuller, in a non-verbal version of persuasion. However, Angela Petrelli, due to her experience with Maury and Arthur, was able to resist him, and in doing so caused herself a nosebleed, similar to the ones Matt gets around the Haitian. She did not prove entirely successful, as Matt was able to get a name from her, Victoria Pratt. The persuasive effect of thought projection did not seem to affect Peter who was able to resist and counter.

Matt experienced painful feedback when he tried to read Future Peter's mind. However, Peter did not appear to suffer any ill effects, perhaps because he was more experienced than Matt. Matt can now read the thoughts of another with little effort, only having to concentrate to read deeper complex thoughts. Matt can also cast telepathic illusions to mislead individuals. These illusions can deceive a target's senses of sight, hearing, and touch.

Matt has since refined the ability to enter the minds of others, even able to find a way out in an attempt to free Angela. Thanks to Daphne, Matt now has the skill to bring other people with him into another's mind and take them all back to the physical world. When Matt activates his ability to read Mr. Millbrook's mind, he is able to recieve the thoughts of Daphne Millbrooke. He is able to interpret and understand each without being overwhelmed. Matt can also locate others by homing in on their thoughts.

Although Maury said that he can recieve mental images, Matt has not yet displayed this aspect of his power yet.

Matt was able to hear the thoughts of the whole city when he was "zapped" by Ando's ability.

Matt's father stated that his powers only started with mind-reading. At the time of his first encounter with his son, Maury Parkman was far more adept than his son at using this ability. He is able to trap people in nightmarish visions that can fool the senses, such as he did with Molly, Matt, and Nathan. In order to put an individual into a nightmare, Maury first has to find a nightmare from the individual.

He is also able to sense and block mentally intrusive abilities and damage the minds of people who attempt to do this—such as when he incapacitated Molly when she used her ability to find him, and caused Matt pain when blocking his telepathy.

After escaping Level 5, Maury used his ability to cause Nathan and Daphne to see and speak with a projected mental image of Daniel Linderman. However, he was either unable to deceive Daphne's sense of touch or she caught him by surprise before he could react, and she was able to sense his deception by passing a file through "Linderman's" chest. At this part of the power Matt has proven more adept as he was able to fool Knox's sense of touch when he cast an illusion to trick him.

Initially, Peter could only read the minds of others. Originally, he was unable to do so with focus or intent, seemingly hearing thoughts accidentally and scanning the memory of his mother while in the future. He first used the power on purpose to listen to the thoughts of Victoria Pratt. He was able to project thoughts after Matt projected thoughts into his own mind. The persuasive effect of thought projection did not seem to affect either of them.

During a visit to see Gabriel Gray in the exposed future, Gabriel was able to resist Peter's use of telepathy, although the reason is unknown. Also after Peter activated Intuitive Aptitude, his use of telepathy became more refined as he appeared to be able to scan Nathan's memory to analyze his thought patterns.

While examining Angela's mind to find the reason for her coma, he sees an image (the Pinehearst logo) instead of hearing an actual thought.

Peter has displayed a few things that Matt has yet to acomplish with telepathy such as seeing actual images in people's minds. Maury said that this was an aspect of the power but Matt has yet to display it. Peter has however, such as when he was trying to remember Angela in the future he scanned her memories and saw the actual images connected to them. This was accidental, but later he was able to see an image in Angela's mind (the Pinehearst logo) while trying to read her mind, but this was after he activated intuitive aptitude which seemed to help him gain better control over his various powers.

Arthur was already an experienced user of telepathy in April 2006. He can use this ability to read thoughts, project thoughts, control a person's behavior and personality, and alter a person's memories. According to Daniel Linderman, lasting telepathic alterations, such as constant mind control or erasing memories, to a person's mind leave "scars" but evolved humans possessing the ability of healing or regeneration can counter memory loss by healing the scars.

After being paralyzed by Angela's poison, Arthur could still communicate telepathically.

Arthur was able to imprison Angela within her own mind in a unresponsive trance, disguise himself as Daphne within Angela's mind to trick Matt, and inflict a psychosomatic stab wound upon Matt from inside Angela's mind. He can also enter the minds of others that are not close to him.