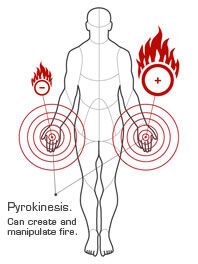 Pyrokinesis is the ability to mentally generate and manipulate fire. One with this ability could manipulate existing fires, and can consume his body in flame and/or hurl fire at foes. One with this ability could even ignite fires to keep them from going out or to warm them. A pyrokinetic is able to excite the particles or even the atoms of objects until they set fire in a manner similar to Frictokinesis. Certain facets of this ability may or may not include another ability known as Pyrokinetic Resistance. Those that also have Pyrokinetic Resistance as a result of this ability may or may not be immune to flames besides the flames that they create.

A master of their Pyrokinetic abilities could generate and manipulate massive amounts of extremely high temperature fire, flames, and heat. They could smother an intense flame to nothing instantly, or generate enough flames to destroy cities in an equally short amount of time.

Meredith normally demonstrates her ability by creating a small fire from her fingertips or in the palm of her hand, however she can also create fireballs and directed streams of flame. Heat from her hand can quickly spread along the walls of a shipping container, making them hot enough to burn Claire. Meredith is not hurt by the fire she creates, and she seems to be resistant to other consequences of its use; her flames generated enough heat and consumed enough oxygen from a shipping container to nearly suffocate Claire, but Meredith seemed completely unaffected, not even breaking a sweat. It is not yet clear whether she would be resistant to flames or heat that she did not create herself.

Claude Rains claimed that Meredith "exploded" when he and The Company tried to "bag and tag" her for the Company, indicating that she can produce large amounts of flame from all over her body. The maximum amount of heat and/or flame she can produce is not yet known.

After capturing Meredith, Thompson was able to prevent her from attacking him by making her wear flame retardant gloves, suggesting Meredith is dependent of her hands to use her ability. Thompson also threatened to place her in an asbestos-lined cell.

When Sylar injected her with adrenaline, Meredith's power became increasingly difficult to control; she involuntarily released bursts of flame with increasing frequency, and eventually "exploded" in a fireball that set fire to the Primatech Research building.

Flint demonstrates advanced control over his ability of pyrokinesis, and will often keep the fires he creates burning just for amusement. Flames that he creates are always blue to blue-ish white, indicating that they are burning at a high temperature that he describes as "extra hot". Flint tells Meredith that he manipulates his fire so that it is hotter than hers.

Flint claims that he can't be burned, suggesting either that he has some control over flame that he doesn't create himself or that his ability provides him with immunity to high levels of heat and flame from any source.

Maarten shows advanced control over his ability, as he is able to conjure large flames and launch them in precise streams over long distances or unleash and manipulate the flames from all across his body. Even though he was momentarily stunned by the liquid man's explosion of water, he was able to quickly recover and resume conjuring flames.

Iris has only demonstrated her ability by creating a small fire in the palm of her hand.