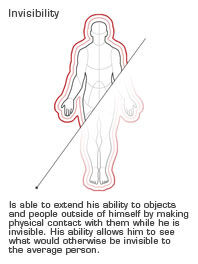 Invisibility is the inability to be perceived by the sense of sight (user is immune to light-based attacks and illusions in this state, and no light is required to see); if the psychic aura deflects/distorts light or sheathes the user in invisible energy, the user is rendered unseen to the naked eye (he becomes invisible) It can be accomplished by a few ways, and depending on the way that this is done it can either be psionic in nature, or biological.

However, other means of invisibility may also be employed. Those are listed as follows:

The first and most common method of becoming invisible is through direct manipulation of light waves, making it a photokinetic ability. This method actually bends the light waves around the user of this ability as for them to appear invisible. This method isn't actual invisibility, but it does render the user generally immune to photokinetic attacks and abilities.

This form of invisibility is capable of rendering the user invisible in all wavelengths of light, but only at the conscientious decision of the user. Generally with this form of invisibility are still detectable by infrared scanners, making their heat signatures visible, but if they are adept enough they could become undetectable even by this method of detection, since invisibility is primarily a reflexive ability and only applies to what the user instinctually understands as visibility, which would not include frequencies beyond their general range of vision. This depends solely on their awareness of the frequencies of light that they are bending - theoretically they could alter the path of any frequency of light from Radio to Gamma, which is what would render them completely undetectable.

The photokinetic user of invisibility is able to see by utilizing psychic energy to see instead of any band of light. This is also what allows one with this ability see others who have rendered themselves invisible, by automatically seeing the wavelengths of light that they have not made themselves invisible to.

This method of invisibility is capable of rendering items that the user touches invisible as well, this generally applies to clothing that they wear. However, it also applies to held objects. The user can selectively choose what they render invisible with this aspect of the ability.

The least common form of invisibility to possess, while this is achievable by mostly any telepath, it is possible to only possess this ability, without other aspects of telepathy (or vice versa). This form of telepathy only works on things with minds capable of thought. This is because it only renders the person invisible to other people, forms of technology are capable of detecting them with ease. On the other hand, a person who is within a certain radius, and looking through a machine at them, regardless of its wavelength of light, are incapable of seeing them. It functions by creating a telepathic field within a certain radius of the user.

This form of invisibility also allows the user to render things that they are touching or wearing invisible to people as well.

Biological Invisibility functions one of two ways depending on the specific evolved human. The first method involves changing the body's cells completely transparent, which allows light to pass through them, making them actually invisible. This method of invisibility has an as of now unexplainable method of sight for the user.

The second method is very similar, but it actually makes cells immune to light; light would not either reflect, or refract or absorb or repel light. Instead it passes through the user's body as though the user's body had a form of Intangibility focused on the phase of visible (or all) light. Sight capability is accompanied by Lightless Vision, as in Photokinetic Invisibility.

Biological Invisibility of both varieties prevents detection through means that require the perception of light, although perception of heat or psychic energy signatures or psychic imprints or the like can detect them still.

Claude has demonstrated some ability to make objects that he picks up or carries invisible: his clothes, for example, turn invisible with him. A pretzel he stole on another occasion, however, did not immediately become invisible. This confirms Claude's method of invisibility as Hermekinetic Invisibility. Why objects become invisible in some circumstances but not in others isn't yet known. Additionally, Claude can make only certain parts of his body become invisible, he was able to make only his hand invisible.

Invisibility is one of Peter's more developed abilities. Peter has spent far more time using it than most of his other abilities, due to the extended period of time spent training while invisible with Claude. This may be why turning invisible has frequently been his first response when threatened. Peter has demonstrated the ability to turn at least one other person invisible in addition to himself while in contact with them.